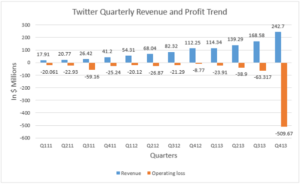 Twitter’s fourth quarter reports show a drop in the social media titan’s revenue and advertising but a groundswell in its number of users.

The average number of daily users increased by 11 percent over last year.

Also, people who are using the Twitter platform are staying longer and are observing more tweets than they have in the past.

According to computerland.com, Twitter believes courting higher user numbers will attract advertising revenues to its site, thus resurrecting its ad-revenue base.

Their ad revenue dropped one percent globally over last year, and its US ad revenue fell 5 percent.

Brand advertisers will be coming back to the table with Twitter for 2017, giving the online titan a chance to flaunt their growing platform population and marketing credibility.

Twitter has been pushing their video ads, which have grown in numbers although they glean less profit for them. But the general hope the drop in net profit can be covered in 2017 with volume.